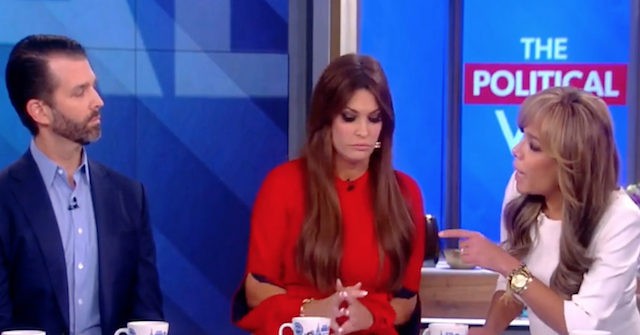 On Thursday’s broadcast of ABC’s “The View,” Donald Trump Jr. and Kimberly Guilfoyle battled the panel over the outing the whistleblower who is believed to have started the House Intelligence Committee’s impeachment inquiry.

Abby Huntsman said, “You did something that triggered a lot of people yesterday, including myself by releasing the name of the whistleblower. The whistleblower whose complaint has led to impeachment hearings. The whole point of releasing a name is to intimidate someone, to threaten someone, and to scare other people from coming out. That’s something that dictators do. I have lived in China. I have seen that first hand. That’s not what America does. We stand by our people. Why did you want to release the name?”

Trump said, “I think the reality of the answer is the whistleblower’s name was on a little website called the Drudge Report a couple of days ago. I literally quote tweeted an article that had the guy’s name in the title of the article.”

He continued, “I wish the outrage would be equal. I mean, there was no outrage when, you know, my family got an exploding letter with white powder substance in it. They’re protecting a guy, you know, in the CIA and there’s great outrage, but when your family gets something, and that’s a big part of the book which is, it’s not a level playing field in terms of outrage. We live in an outrage culture.”

He added, “I’m a private citizen putting this out there. I don’t see any difference whatsoever. The reality is it seems to me, and my point of view on this, it seems to me that everyone is outraged that his name is out there because now people are saying, okay. He’s tied to Joe Biden while Joe Biden was working in the White House. He has ties to Brennan, who was leading on Trump. Let’s be honest about what it is.”

Huntsman said, “That’s not why I’m outraged. I’m outraged because I care about diplomacy in this country. I care about how we protect the people when they see a wrongdoing, and they go through the proper political channels, and they are protected for doing that.”

Trump said, “ABC is right now chasing down a whistleblower about all of the Epstein stuff because those stories were killed. So if we’re going to have the conversation about the outrage about whistleblowers, you work with CBS who oust the whistleblower.”

Whoopi Goldberg interrupted Trump saying, “Can we stay on the topic. We ask one question, and we stick to it.”

Trump said, “It’s hypocrisy. A big part of why I wrote the book is because there’s so much hypocrisy out there. I understand that mainstream is left leading, and I don’t think anybody doubted of debated that for a long time, but they have gotten rid of the pretense of objectivity. We’re just going to be the marketing wing of the other side.”

Sunny Hostin said to Guilfoyle, “Kimberly, you’re a lawyer…did you advise your boyfriend that it is a federal crime to out a whistleblower?”

Trump Jr. interjected, “It’s only a federal crime for the IG to do it.”

Hostin shot back, “My law degree says it is.”