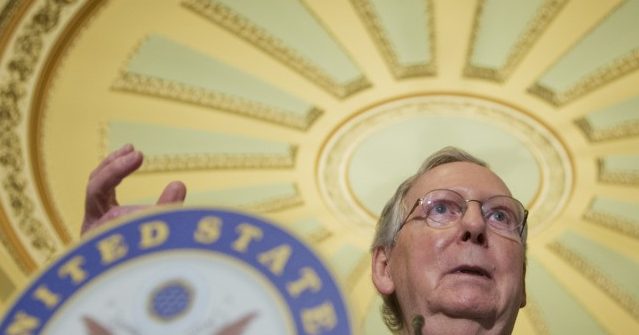 Several anti-Kavanaugh protesters marched from the Supreme Court to pose in front of Sen. Mitch McConnell’s (R-KY) house and cover his front door with caution tape.

The left-wing demonstrators— which included people from the Women’s March, Demand Justice, and Center for Popular Democracy— were marching in Washington, DC, on Sunday to ensure Congress knew that they were watching, and demanding that congressional leaders investigate Kavanaugh.

The protesters rallied in front of the Supreme Court and eventually made their way down to what is thought to be McConnell’s D.C. residence.

“The police are not going to arrest us here,” one of the demonstrators shouted with a bullhorn. “How do you feel about paying a visit to Mitch McConnell’s house?”

Many of the demonstrators repeatedly chanted, “No justice, no peace, we take to the streets,” and “unfit to sit,” referring to what they think is Kavanaugh’s inability to serve on the Supreme Court on the way to McConnell’s house.

In one minute-long video clip, one woman could be seen knocking on the front door of the house covered in yellow tape which said, “reclaim the court,” while wearing a shirt that said, “Impeach the MF.”

The group of left-wing protesters were out in full force to “celebrate” the anniversary of Justice Brett Kavanaugh’s confirmation by protesting “his inadequate and intentionally incomplete confirmation process.”