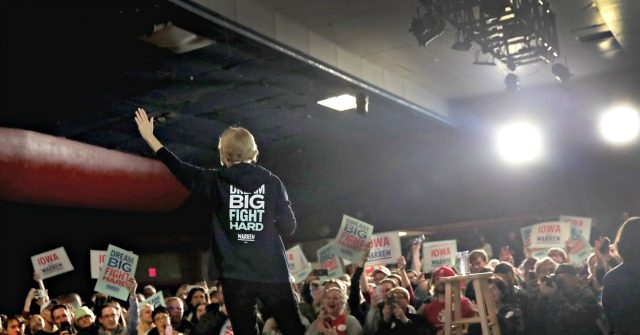 Biden, who has made no effort to hid his distaste for Waren’s style of populist politics, was asked by reporters aboard his “No Malarkey” bus tour if the Massachusetts Democrat’s support in Iowa posed a threat to his own hopes of mounting a comeback in the state. The former vice president responded by dismissing Warren’s supposed enthusiasm outright, according to The Wall Street Journal.

“You don’t see that with Warren,” Biden told reporters. “Stop kidding a kidder, okay? Come on, man. Give me a break.”

When pressed on the topic, the former vice president pointed to his own lead in national polling, before mocking Warren for needing to spend millions introducing herself to voters in New Hampshire, when she represented the neighboring state in Congress.

“Look at the polling everywhere. Tell me. Tell me where the polling has manifested itself,” Biden said. “She lives in Massachusetts, she’s invested millions and millions of dollars in New Hampshire, why shouldn’t she be known there?”

Biden’s criticism of Warren is only the most recent contentious exchange of slights and attacks going back months. The tension initially started when the former vice president’s campaign accused Warren of lying about the true costs of her Medicare for All proposal. After months of such attacks, Warren responded by suggesting Biden was running in the wrong presidential primary. Warren’s rebuke set off another round of attacks from Biden’s campaign, with some of the former vice president’s staff highlighting the senator’s own prior Republican affiliation in an effort to discredit the criticism.

Biden, himself, responded to Warren shortly after her initial comment by penning an article on Medium repudiating her “elitist” and “condescending” approach to politics. Although the former vice president did not mention Warren by name in the piece, the pointedness of his attacks left little doubt as to whom they were aimed at.

Some call it the ‘my way or the highway’ approach to politics. But it’s worse than that. It’s condescending to the millions of Democrats who have a different view. It’s representative of an elitism that working and middle class people do not share: ‘We know best; you know nothing’. ‘If you were only as smart as I am you would agree with me.’

The flare-up between the two camps also underscores the precarious position Biden finds himself in less than three months away from the Iowa Caucuses. Although the former vice president started the race as the clear frontrunner, leading the field by as much as 32 percentage points at one point, his campaign has steadily declined in recent months.

Biden’s decreasing political fortunes have come as Warren’s have only increased. The Massachusetts Democrat has leapfrogged Biden in the early primary and caucus states. A recent poll out of Iowa showed Warren leading the field with 28 percent support among Democrats, while Biden was relegated to fourth place with only 12 percent.

Warren’s enthusiasm in Iowa and across the country has led her to be described as the frontrunner by even some of Biden’s former Obama administration colleagues.