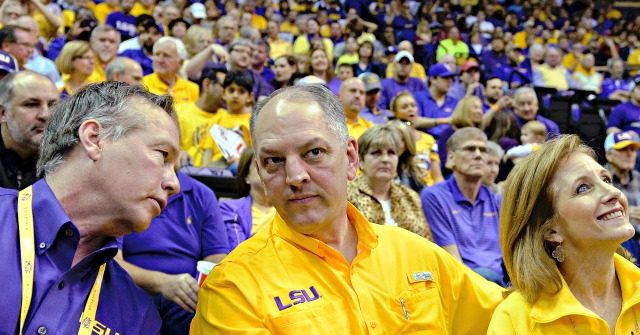 Louisiana’s Democrat Gov. John Bel Edwards called an audible on Tuesday when he met with the #2 LSU football team in advance of Saturday’s big game with #3 Alabama.

The meeting came barely a week before the November 16 runoff general election in which he faces Republican Eddie Rispone in a race most recent polls indicate is a statistical tie.

Edwards, who hosted the football team’s freshmen at the Governor’s mansion in June, struck up a friendship with LSU’s Ed Orgeron shortly after the head coach was hired full-time after the 2016 season and has since been near the team on several occasions.

It was pure politics in a state where voters love football and have seen generations of politicians in state government use their positions to the greatest maximum influence.

In Edwards’ case, the governor appears to be leveraging his position as head of the state government, which funds and operates Louisiana State University, to secure a political advantage over his opponent in the pending election.

I had a great time at practice with the number 1 team in the nation yesterday. The excitement surrounding this game is unmatched, and I’m looking forward to the @LSUFootball Tigers bringing home a victory from Tuscaloosa on Saturday! #lagov #lalege #LSU #GeauxTigers pic.twitter.com/0ZfgqhxMa3

Edwards referred to the LSU Tigers as “the number 1 team in the nation,” which is accurate according to the latest Associated Press rankings. In the College Football Playoff rankings, however, Ohio State is ranked number 1, and LSU is ranked number 2.

One fan tweeted to the governor, “Tigers win on the 9th and you win on the 16th.”

Another tweeted “and bring home a victory in the runoff!”

And @JohnBelforLA bring home a victory in the runoff!

But others were uninspired by Edwards’ pep talk.

“Using your ‘executive privilege’ again to try and gain the votes of Tigers fans, JBE?” one LSU fan tweeted:

Using your “executive privilege” again to try to gain the votes of Tiger Fans JBE??

Another called Edwards’ visit with the team “a good campaign opportunity.”

Hey Edwards, in 2016 I believe it was you who threatened to cut LSU football due to budget concerns. The #1 team in college football just too hard to pass up on a good campaign opportunity. Never threaten LSU football! We never forget! Geaux Tigers!@realDonaldTrump

In April, Coach Orgeron endorsed Edwards at a fundraiser. That endorsement has drawn fire from Republicans across the state.

The coach, who grew up outside Houma, introduced Edwards at an event that cost $1,000 to $5,000 per plate to attend. It was held at the LSU Andonie Sports Museum on the university’s campus and all the proceeds are going to Edwards’ reelection efforts. The governor faces two Republicans — Congressman Ralph Abraham and Baton Rouge Businessman Eddie Rispone — on the ballot this fall.

The Hayride, a conservative Louisiana news site, criticized Edwards for accepting Orgeron’s endorsement at a fundraiser.

It was not clear if Edwards’ opponent in the November 16 election, Republican Eddie Rispone, was also given an invitation to meet with the LSU football team in advance of Saturday’s big game with Alabama.

But Rispone had a meeting of his own on Wednesday, when President Trump came to Monroe, Louisiana, and hosted a rally to support Rispone in his campaign against Edwards. Trump told the boisterous audience that Rispone, a self-made multi-millionaire, “will put his business genius to work to help Louisiana,” as Breitbart News reported.

Louisiana is Trump country! Thank you @realdonaldtrump for coming down to help us get out the vote. There are only three days left of early voting, geaux vote so we can fire the liberal, tax and spend career politician, @JohnBelForLA, and Make Louisiana Great Again. #LAgov pic.twitter.com/ThV3LRT29D

A poll of 600 likely Louisiana voters conducted by JMC Analytics between October 24 and October 26 gave Edwards a two point lead over Rispone, 48 percent to 46 percent.The poll has a margin of error of four percent.

An Edgwater Research poll of 722 likely Louisiana voters conducted on October 28 yielded similar results, giving Edwards a three point lead over Rispone, 50 percent to 47 percent. That poll has a margin of error of 3.6 percent.

Early voting has already begun, and will continue until this Saturday.

Politics is expected to play a significant role in the media coverage of Saturday’s big game between LSU and Alabama in Tuscaloosa, Alabama, on Saturday for another reason: President Trump is scheduled to be in attendance.