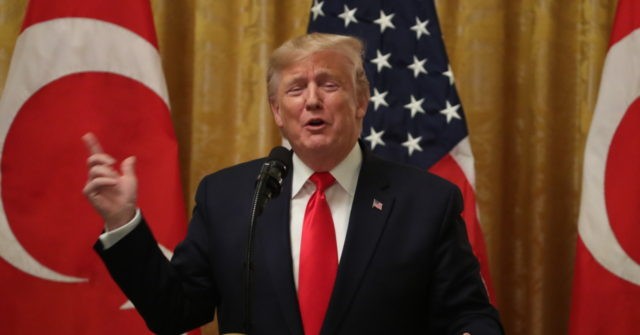 President Donald Trump said Wednesday he wanted to know the identity of the so-called “whistleblower” who kicked off the impeachment inquiry, dismissing the latest public hearings conducted by House Democrats.

“I want to find out who is the whistleblower, because the whistleblower gave a lot of very incorrect information, including my call with the President of Ukraine,” Trump said, repeating that his conversation with President Volodymyr Zelensky was “perfect” and “highly appropriate.”

Trump said that he had not watched the hearings, as he hosted the President of Turkey Recep Tayyip Erdogan for much of the afternoon.

“I hear it’s a joke,” he said. “I haven’t watched for one minute because I’ve been with the president, which is far more important as far as I’m concerned.”

Taylor testified during the hearing that he recalled a staffer telling him of overhearing a July 26 phone conversation between Ambassador to the European Union Gordon Sondland at a restaurant.

When the aide asked Sondland what the president thought about Ukraine, Taylor recalled that the staffer said that Trump “cares more about the investigations of Biden.”

Asked by Fox News reporter John Roberts about the phone conversation, Trump said he did not recall it.

“I don’t recall, no, not at all, not even a little bit,” he said. “I know nothing about that, first time I’ve heard it.”

Trump appeared annoyed that Democrats continued to press for impeachment, despite most of the information being derived from third-hand sources.

“This is a sham and it shouldn’t be allowed,” he said.