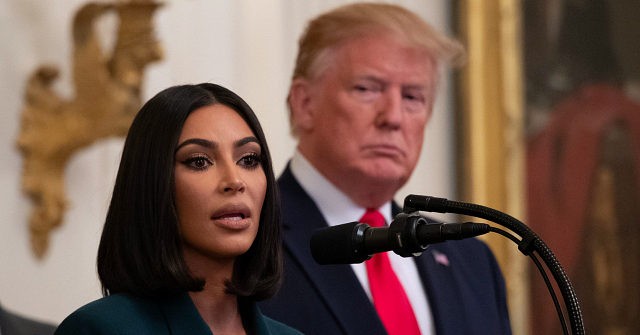 The president spoke about the importance of giving former prison inmates a second chance to find work and thanked Kim Kardashian and Kanye West as well as his daughter Ivanka Trump and son-in-law Jared Kushner for their work on the issue of prison reform.

“Jared and Ivanka were incredible and they really pushed it, and I think they were being pushed a little bit also by Kim Kardashian … and Kanye,” Trump said as the audience applauded.

Several former inmates joined the president on stage, speaking about the importance of a second chance and thanking Trump for his efforts.

“Too often, former inmates are not considered for jobs even if they are qualified, rehabilitated, and ready to work, and that’s why we’re taking crucial steps to encourage businesses to expand Second Chance hiring practices,” Trump said. “So when we say, ‘Hire American,’ we mean all Americans.”

Kardashian said it was an “honor” to be at the White House for the event, thanking Ivanka and Jared for getting her involved in the Trump administration’s effort to support prison reform.

“I just felt like, for me, I am at the place in my life that I wanted to make a difference and just wanted to do the right thing,” she said.

She said she was moved to study law and get involved with the issue of prison reform, which inevitably inspired her to spend more time advocating for former inmates.

“To get the president’s support and to see it come to fruition was magic,” she said.