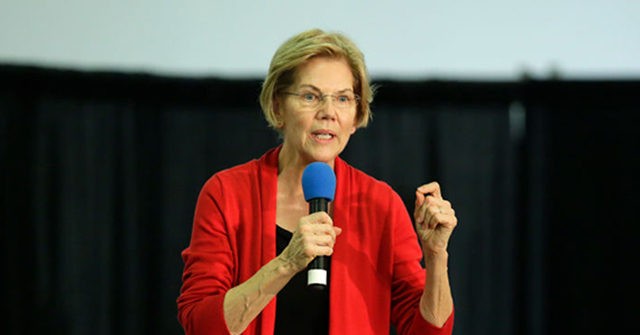 Sen. Elizabeth Warren (D-MA) on Friday released her plan to transition the United States to her $52 trillion Medicare for All program, notably holding off on ending private insurance right off the bat and making it part of her second legislative push, which she claims will occur before the end of her first term.

Warren unveiled her Medicare for All plan in a Medium post this month, proclaiming, proudly, that the multitrillion-dollar plan would not require a tax hike on middle class Americans, even though experts state that it would. Rather, Warren claims she will pay for the plan, in part, via an additional tax hike on the wealthy, cuts on defense spending, and amnesty.

The presidential hopeful added to her plan on Friday, explaining how she would transition the country to a Medicare for All system. While she claims the transition would occur entirely in her first term, its enactment would occur under two legislative pushes. She describes the first as a “fast-track budget reconciliation legislation to create a true Medicare for All option that’s free for tens of millions”:

Coverage under the new Medicare for All option will be immediately free for children under the age of 18 and for families making at or below 200% of the federal poverty level (about $51,000 for a family of four). For all others, the cost will be modest, and eventually, coverage under this plan will be free for everyone.

Then, “no later” than her third year in office, Warren would “fight to pass legislation that would complete the transition to full Medicare for All,” essentially eliminating the need for private insurance:

Warren believes that the methodical, step by step approach will result in “millions” of Americans paying less in health care and claims they will see the “quality of their current health coverage improve.”

“And millions more Americans will have the choice to ditch their private insurance and enter a high-quality public plan,” her plan states, reiterating that it will not result in an increased tax burden for middle class families.

“And, at each step, the changes in our health care system will be fully paid for without raising taxes one penny on middle class families,” her plan claims.

“Let’s not kid ourselves: every Democratic plan for expanding public health care coverage is a challenge to these industries’ bottom lines – and every one of these plans is already being drowned in money to make sure it never happens,” Warren wrote, adding in a jab to two of her fiercest Democrat critics, Mayor Pete Buttigieg (D) and former Vice President Joe Biden (D).

“Any candidate who believes more modest reforms will avoid the wrath of industry is not paying attention,” she warned.

Warren confirmed at a town hall meeting in Raleigh, North Carolina, this month that her Medicare for All plan will also cover illegal immigrants.

“Medicare for All, as I put this together, covers everyone, regardless of immigration status, and that’s it,” Warren told the crowd: