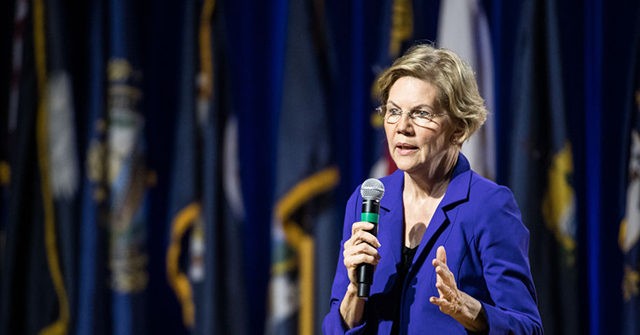 In rare form, Warren, who has embraced and tweaked many of the positions long held by Vermont’s socialist senator, expressed a vastly different position than her ideological similar, telling Democracy Now!’s Amy Goodman that she does not agree with Sanders’ view that billionaires “should not exist.”

“If somebody has a great idea and they followed through and they work hard and they built something, then good for them,” Warren said, adding that they should pay a wealth tax to help others have the same opportunity:

Here’s the video of Warren disagreeing with Sanders and insisting that we should have billionaires pic.twitter.com/tsZR9Fzyx9

AMY GOODMAN: Bernie Sanders says there should be no billionaires. Do you agree with that?

AMY GOODMAN: Why not?

ELIZABETH WARREN: If somebody succeeds and makes it big, “good for them,” but they should pay a wealth tax to grow opportunity for others.

It is a similar answer Warren has issued on the campaign trail. She has contended that she does not have an issue with billionaires, despite targeting them in the past — specifically, in her wealth tax plan and her “calculator for billionaires.”

“Look I don’t have a beef with billionaires,” Warren said during the last Democrat debate.

“My problem is, you made a fortune in America, you had a great idea, you got out there and worked for it, good for you. But you built that fortune in America — I guarantee — you built it in part using workers all of us helped pay to educate,” Warren said.

“All I’m saying is, you make it to the top of one-tenth of one percent, then pitch in the two cents so every other kid in America has the chance,” she added.

Despite her difference in opinion on a billionaire’s right to exist as a billionaire, both Sanders and Warren have proposed wealth taxes as central points of their platforms.

Warren’s “Ultra-Millionaire Tax” targets individuals with more than $50 million in assets, levying a two percent tax, which goes up to three percent for those with more than $1 billion in assets. However, her $52 trillion Medicare for All plan increases the taxes on the ultra-wealthy, “asking billionaires to pitch in six cents on each dollar of net worth above $1 billion.”

Hillary Clinton, who has been teasing a potential last-minute 2020 bid, expressed doubt over Warren’s and Sanders’ wealth tax proposals.

“I just don’t understand how that could work, and I don’t see other examples anywhere else in the world where it has actually worked over a long period of time,” Clinton said at the New York Times’ DealBook conference this week.

“But assume you can get some system of evaluation, people would literally have to sell assets to pay the tax on the assets that they owned before the wealth tax was levied,” she continued.

“That would be incredibly disruptive, so I think there are other ways to raise the revenues,” she added.