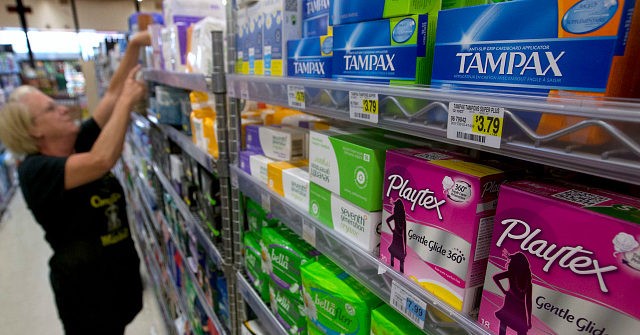 Activists are preparing for the “world’s first National Period Day” on Saturday, October 19, in an effort to elevate “the issue of period poverty.”

Activists behind National Period Day say that “period poverty” is an issue plaguing the country. They assess that “1 in 4 women struggle to afford period products due to a lack of income.” They also believe “period stigma” is making menstruation a “taboo topic,” despite the emergence of the Women’s March movement, which resulted in Ashley Judd’s infamous “Nasty Woman” speech in the nation’s capital in 2017.

“I am not as nasty as a man who looks like he bathes in Cheetos dust,” Judd said, later lamenting “bloodstains” on her bedsheets:

I am nasty like my bloodstains on my bed sheets. We do not actually choose if and when we had our periods. We do not like throwing away our favorite pairs of underpants. Why are pads and tampons still taxed when Viagra and Rogaine are not? Is your erection really more than protecting the parts of my womanhood? Is the bloodstain on my jeans more embarrassing than the thinning of your hair?

Activists are pushing rallies across all 50 states in hopes of “demanding real change to making period products more accessible for all and ending the #TamponTax.”

“If faces were bleeding, someone would do something,” the PERIOD Movement tweeted alongside a video of people — including men — with bloody noses.

“THIS SATURDAY is the first-ever #NationalPeriodDay. We’re hosting rallies in all 50 states to demand menstrual equity and an end to the #tampontax,” it added.

“You don’t have to have PMS to be f*cking pissed off about this, but it helps,” those in the video stated:

🔴If faces were bleeding, someone would do something 🔴THIS SATURDAY is the first-ever #NationalPeriodDay. We’re hosting rallies in all 50 states to demand menstrual equity and an end to the #tampontax. Find your local rally at https://t.co/kj1mxlVLqK. @SeventhGen @BBDOSF pic.twitter.com/qPxrRwlGuQ

Saturday, October 19th, is the first-ever #NationalPeriodDay.@periodmovement is hosting rallies in all 50 states to demand menstrual equity and an end to the #TamponTax.

📢55 rallies. 50 states. Join us.📢#NATIONALPERIODDAY is 6 days away❗Find your local rally at https://t.co/kj1mxmdmPk and get ready for October 19🗓️⁣ Big thank you to @seventhgeneration for helping to make #NPD possible! pic.twitter.com/s93l2oGwjQ

The events are endorsed by the Menstrual Movement coalition, which has penned a “MENSTRUAL MOVEMENT MANIFESTO.”

We believe that it is a fundamental human right to be able to discover and reach your full potential, regardless of a natural need – and what could be more natural then menstruation? Simply put — MENSTRUAL HYGIENE IS A RIGHT, NOT A PRIVILEGE.

We are the Menstrual Movement — fighting for equitable access to menstrual hygiene, and breaking down the stigma surrounding periods. This fight is on ALL OF US, and we must TAKE ACTION NOW. Unlike most poverty-related issues, this one is solvable. Along with destigmatizing periods, we are calling for:

1. Clean and healthy period products to be freely accessible in schools, shelters, and prisons

Far-left “Squad” member Rep. Ilhan Omar (D-MN) tweeted support of the movement, noting her role as a co-sponsor of the Menstrual Equity for All Act:

It’s time that we acknowledge menstrual health as a critical part of care.

No student should be forced to miss school because they don’t have access to affordable menstrual products.

That’s why I am a proud cosponsor of the Menstrual Equity for All Act. #NationalPeriodDay

The PERIOD Movement is encouraging activists to promote the cause on Saturday by using the hashtags “#NATIONALPERIODDAY” and “#PERIODPOWER.”