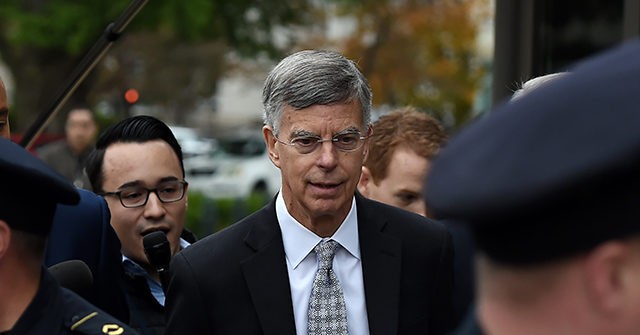 House Democrats on Wednesday afternoon released the transcripts of its interviews with William Taylor, the U.S. ambassador to Ukraine, as part of their partisan impeachment investigation into President Donald Trump.

Taylor told the investigators he understood that the security assistance, and not just a White House meeting for Ukraine’s new president, was conditioned on the country committing to investigations of Joe Biden and also Democrats’ actions in the 2016 election.

“That was my clear understanding, security assistance money would not come until the president committed to pursue the investigation,” Taylor said.

Lawmakers asked if he was aware that “quid pro quo” meant “this for that.”

The Democrats are investigating President Trump’s requests for Ukrainian actions as the U.S. withheld military aid from the country. Trump, backed by Rudy Giuliani, asked new Ukrainian President Volodymyr Zelenskiy in a July telephone call to probe Trump’s political rival Joe Biden and his family and also to investigate Ukraine’s possible role in the 2016 presidential election.

The Democrats are looking for connections between Yovanovitch’s dismissal, the holdup in military assistance for Ukraine and President Trump’s push for the country to open investigations.

On Tuesday, the interview transcripts of Gordon Sondland, the U.S. ambassador to the European Union, and former U.S. envoy to Ukraine, Kurt Volker, were released.

In his revised testimony on Monday, Sondland claimed to congressional investigators that he told Andriy Yermak, a senior Ukrainian official, that the eastern European country may not receive U.S. military aid unless it looked into allegations of corruption against the Bidens.

“After a large meeting, I now recall speaking individually with Mr. Yermak, where I said that resumption of U.S. aid would likely not occur until Ukraine provided the public anti-corruption statement that we had been discussing for many weeks,” he told lawmakers.

“I presumed that the aid suspension had become linked to the proposed anticorruption statement,” the top diplomat added.

Sondland’s revised testimony comes after testifying on October 17 that President Trump asserted to him that he wanted “nothing” from Ukraine and that no “quid pro quo” took place between him and Zelensky. Further, Sondland also testified that in a text message exchange with Taylor, the president told him there was no quid pro quo with respect to Ukraine and the Biden family. “The President has been crystal clear: no quid pro quo’s of any kind. The President is trying to evaluate whether Ukraine is truly going to adopt the transparency and reforms that President Zelenskiy promised during his campaign,” Sondland texted Taylor on September 9.

In addition Sondland, the transcripts of former U.S. envoy to Ukraine Kurt Volker were released, showing the ex-diplomat dismissed allegations that President Trump mulled withholding a meeting with Zelensky until he agreed to investigate claims that Ukraine interfered in the 2016 presidential election.

“The answer to the question is no, if you want a yes-or-no answer. But the reason the answer is no is we did have difficulty scheduling a meeting, but there was no linkage like that,” Volker testified to congressional investigators.

Further, Volker batted down claims that President Trump sought opposition research, or “dirt,” on Biden, the 2020 Democrat frontrunner. The former U.S. envoy also denied that the president was thinking of ways to “manufacture” dirt on the former vice president. “No,” Volker replied when asked about the claims. “I’ve seen that phrase thrown around a lot. And I think there’s a difference between the manufacture or dig up dirt versus finding out did anything happen in the 2016 campaign or did anything happen with Burisma. I think – or even if he’s asking them to investigate the Bidens, it is to find out what facts there may be rather than to manufacture something.”

President Trump and Zelensky have vehemently denied any pressure was applied to investigate the Bidens and the White House released a transcript of the world leaders’ phone conversation as evidence that no wrongdoing took place.

“There was no blackmail,” Zelensky told reporters last month. “We are not servants. We are an independent country.”

The Associated Press contributed to this report.