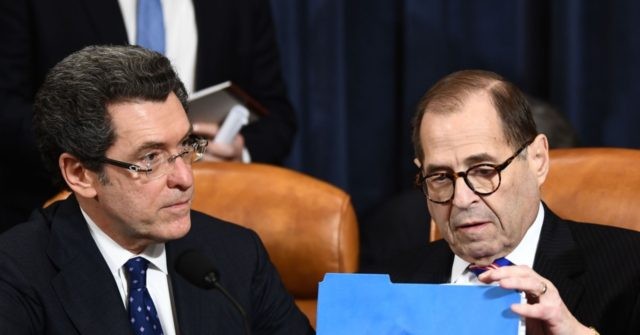 The House Judiciary Committee released a report Saturday in which it argued that a president may be impeached for “illegitimate motives” even if his actions are “legally permissible.”

The 52-page report, written by 20 members of the staff for the Democratic majority, attempts to provide a legal and constitutional basis for the Democrats’ ongoing effort to impeach the president.

That novel theory is only one of several questionable features of the report.

1. The report ignores all of the “expert” legal scholars who testified three days before. The report does not bother to cite any of the testimony from Wednesday’s lengthy hearing, with three witnesses called by Democrats and one called by Republicans. That suggests the report was written well in advance of the hearing. The report does cite published works by one of the witnesses, Micharl Gerhardt, but ignores those of his writings unhelpful to their case.

2. The report uses the same misquote used in the hearing, and by Speaker of the House Nancy Pelosi (D-CA). The Democrat staff cite President Donald Trump as saying Article II of the Constitution means can do  whatever I want as president.” As Breitbart News explained Friday, that is a misquote (backed by deceptively-edited video in the hearing), because Trump was talking specifically about his power to fire the Special Counsel (which he did not).

3. The report invents an absurdly broad standard for “bribery.” The report, backed by selective and misleading claims about the Framers’ intent, declares: “Impeachable bribery occurs when the President offers, solicits, or accepts something of personal value to influence his own official actions.” That standard would implicate every elected official in the United States, all of whom accept campaign contributions in return for policy promises.

4. The report cites radical left-wing activists committed to impeaching Trump. The report cites “scholars” such as Zephyr Teachout, who is on the advisory board of a group called “Impeach Trump Now.” It also cites Harvard’s Lawrence Tribe, who declared in December 2016 that Trump’s impeachment should “begin on Inauguration Day.” It ignores contrary views, even by left-wing sources like Cass Sunstein, whom it quotes selectively (see below).

5. The report invents an absurdly broad “abuse of power” standard. Sunstein wrote in 2017 that “abuse of power” was, by itself, too vague: “Almost every American president has, on more than one occasion, passed the bounds of his power, in the sense that his administration has done something that it is not lawfully entitled to do.” (They cite his book on impeachment, but ignore that point.) Notably, “abuse of power” is not in the Constitution.

6. The report actually defends the impeachment of President Andrew Johnson and cites it as precedent. The Johnson impeachment is almost universally regarded as an error. Yet the report, after conceding that a president “cannot be removed” simply because of “unpopular policies,” argues that Johnson should have been removed for exactly that, because he had “illegitimate motives.” This astonishing claim, citing Tribe, is worth quoting in full:

Rather than directly target President Johnson’s faithless execution of the laws, and his illegitimate motives in wielding power, the House resorted to charges based on the Tenure of Office Act. But in reality, “the shaky claims prosecuted by [the House] obscured a far more compelling basis for removal: that Johnson’s virulent use of executive power to sabotage Reconstruction posed a mortal threat to the nation—and to civil and political rights—as reconstituted after the Civil War … [T]he country was in the throes of a second founding. Yet Johnson abused the powers of his office and violated the Constitution to preserve institutions and practices that had nearly killed the Union. He could not be allowed to salt the earth as the Republic made itself anew.” Viewed from that perspective, the case for impeaching President Johnson rested on his use of power with illegitimate motives.

7. The report bends over backwards to justify impeachment without any crime being committed. The report spends a great deal of space arguing that a president does not have to commit an actual crime to be impeached — a claim hotly debated among scholars. It notes that previous impeachments have included charges of “non-criminal” acts, but ignores the fact that no presidential impeachment has ever proceeded without any criminal acts alleged.

8. After saying crimes are not necessary, the report cites the criminal grand jury process. Immediately after arguing that impeachment is not a criminal process (see above), the report cites the criminal grand jury, in which the accused has few legal rights or protections, in an attempt to justify the House’s bizarre impeachment process, in which President Trump — unlike Presidents Richard Nixon and Bill Clinton — has been denied basic legal rights.

9. The report claims that Trump has more rights than Nixon and Clinton did. That false claim ignores the fact that unlike his predecessors, Trump has not been allowed legal representation in the key fact-finding stage of the process, which Democrats — for the first time — moved to the secretive Intelligence Committee. Moreover, it ignores that Republicans have been denied the ability to object to witnesses called by the Democrat majority.

10. The report claims that hearsay evidence is sufficient to impeach the president. After noting that the usual rules of evidence do not apply in the House, the report ignores that the only witnesses with direct knowledge of the president’s intentions testified that there was no “quid pro quo” regarding aid to Ukraine. One, Gordon Sondland, said he believed Trump wanted a “quid pro quo” for a White House meeting but had no direct knowledge to show it.

11. The report claims the president is “obstructing” Congress by appealing to the courts. The report claims that Trump can be impeached for denying requests for witnesses and documents, ignoring the fact that the president is raising constitutionally permissible defenses that await adjudication by the courts. Notably, the House itself has decided not to pursue key witnesses, apparently because it wants to rush to impeachment before election season.

Notably, the report states its conclusions “do not necessarily reflect those of the Committee on the Judiciary or any of its members.” The committee will hold its first evidentiary hearing toward articles of impeachment on Monday.

Joel B. Pollak is Senior Editor-at-Large at Breitbart News. He earned an A.B. in Social Studies and Environmental Science and Public Policy from Harvard College, and a J.D. from Harvard Law School. He is a winner of the 2018 Robert Novak Journalism Alumni Fellowship. He is also the co-author of How Trump Won: The Inside Story of a Revolution, which is available from Regnery. Follow him on Twitter at @joelpollak.