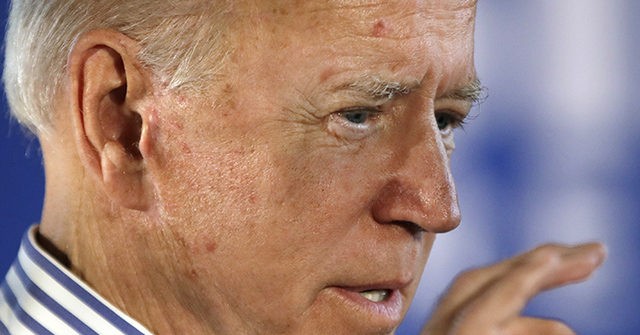 According to prepared remarks obtained by several established media outlets, Biden plans to use his visit to the early primary state to criticize President Trump’s economic policy as hurting those very voters who helped elect him.

The Democrat primary frontrunner will state that the president “thinks he’s being tough” and “it’s easy to be tough when someone else is feeling the pain.”

President Trump believes “his tariffs are being paid by China,” the former vice president is expected to say, per NBC News. “Any beginning econ student at Iowa or Iowa State could tell you that the American people are paying his tariffs. The cashiers at Target see what’s going on — they know more about economics than Trump.”

“How many sleepless nights do you think Trump has had over what he’s doing to America’s farmers? Zero,” Biden will then say.

Contrary to these claims, tariffs on China have not affected consumer prices for at least a year. Breitbart’s John Carney wrote in May that some Chinese imports have actually decreased in price after President Trump enacted new tariffs:

The prices of furniture and bedding, one of the largest categories of China-made imports, are down 2.8 percent annually.

Toys, another big China import category, saw prices fall by a staggering 9.8 percent. Note that most toys imported from China have not yet been subject to tariffs but the decline so far means that even if they are included in later tariff rounds, consumers will still likely be paying less than they were a year ago.

Prices of sports equipment are down 2.7 percent. Most apparel was excluded from the first two tariffs rounds. Prices here are down 2.2 percent compared with a year ago, again implying there is room for tariffs without squeezing consumer wallets.

News outlets such as CNN touted the soon-to-be-delivered speech as a strong rebuke of President Trump and his “America-First” agenda. The partisan outfit ran an editorialized chyron about the remarks which read Biden will “eviscerate” the president.

Biden plans to speak in blue-collar Ottumwa, the seat of Wapello County.

The White House said Biden’s plan to call President Trump an “existential threat” to the nation is “truly laughable.”

“The idea that he would say that the president poses any type of threat is truly laughable considering he was part of the administration that allowed Russia to interfere in our election,” White House press secretary Sarah Huckabee Sanders told reporters

Sanders also noted that Biden was a key member of an Obama administration that allowed China to grow and North Korea to test missiles. The former vice president has “got a lot of explaining to do,” she said.

The Associated Press contributed to this report.