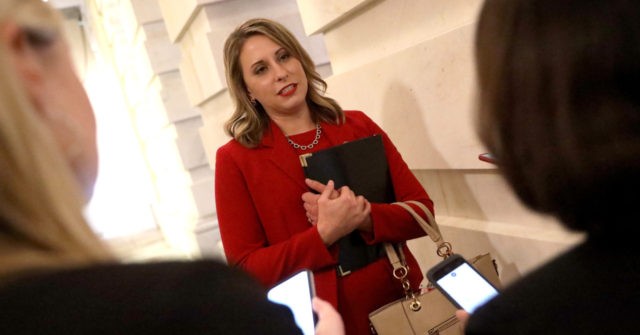 Former Democrat Rep. Katie Hill (D-CA), in recent days, has exposed herself as a radical feminist leftist hellbent on taking down the president and maiming those who support him.

The disgraced Democrat fell from her position of legislative authority in stunning fashion, resigning from Congress after finding herself unable to overcome mounting allegations of inappropriate sexual relationships with members of her staff.

In recent days, Hill has rebranded herself as an “unfiltered,” woman, no longer shackled by expectations to represent a relatively split district or distracted by the political jockeying that dominates the nation’s capital. As such, she has exposed herself for what she has been all along: A radical feminist leftist obsessed with taking down the president.

The California Democrat, 32, rose to the national spotlight in October after allegations of inappropriate sexual relationships with members of her congressional staff surfaced. The allegations included a “throuple” relationship with a female staffer – a relationship she eventually admitted to and described as “inappropriate.” She was also accused of carrying on an affair with a male staffer, which she denied.

Hill formally resigned shortly thereafter, but not before voting alongside her impeachment-driven colleagues to pass the partisan impeachment inquiry resolution, which has yet to expose any instance of criminal behavior on the part of President Trump.

Hill, bizarrely, said she voted in favor of the resolution “on behalf of the women of the United States of America.” Prior to the vote, she attributed her political demise, in part, to sexism and blasted “right-wing media” and “Republican opponents” for “enabling and perpetuating” her husband’s “abuse” by reporting on her alleged sexual escapades.

Scandal aside, Hill did not tend to make headlines during her short tenure as a congresswoman. While she was part of the infamous freshman class of House Democrats – which includes Reps. Alexandria Ocasio-Cortez (D-NY), Rashida Tlaib (D-MI), Ilhan Omar (D-MN), and Ayanna Pressley (D-MA) – she maintained a relatively low profile, at least in comparison. That could have had something to do with the fact that she represented a relatively split district, defeating incumbent Republican Steve Knight with 54.4 percent to Knight’s 45.6 percent.

The district has flipped from red to blue since its creation in both House races and presidential elections, causing its representatives, specifically, to play a different political game than counterparts in “safe” districts.

As an example, Ocasio-Cortez, who has championed radical proposals such as the Green New Deal and formally endorsed socialist Sen. Bernie Sanders (I-VT), secured a win in New York’s 14th district with a whopping 78.2 percent of the vote.

Tlaib secured 84.6 percent in Michigan’s 13th district, and Omar garnered 78.2 percent of the vote in Minnesota’s 5th district. The wide margins grant far-left Democrats more flexibility in terms of promoting radical ideas and ultra-progressive proposals – proposals that tend to make more “moderate” Democrats in the House nervous due to electability.

Hill did not have that luxury, until now. The mask has slipped. She has been, essentially, celebrating her freedom from any burdensome cover like representing a politically split district, which forced her to keep her true thoughts at bay.

On Tuesday evening, the former lawmaker announced in a video on Twitter that she would soon be resurfacing in a more “unfiltered” way, admitting that it had everything to do with the fact that she no longer serves in Congress.

“[I] also wanted you to know I’m starting to resurface. You’re going to be seeing more of me on social media. More of me out and about so I look forward to seeing all of you,” she said, donning a shirt from her “good friend Ayanna [Pressley].

“And I wanted to say that now I’m not a member of Congress it might be a little bit more unfiltered, which I’m kind of looking forward to,” she added:

The fight continues — if you’re not outraged, you’re not paying attention. (shout out to my friend @AyannaPressley for the shirt and the reminder 😉) pic.twitter.com/jUpBOcYIy4

Hill originally ran on run-of-the-mill Democrat ideas, signaling support for Medicare for All and a federal ban on “assault” weapons and calling climate change “one of the greatest threats to our planet.”

However, she also took what many described as a “moderate” approach on immigration, expressing a willingness to compromise: Border security in exchange for DACA protections – a departure from the “Squad.”

In a June 12 piece ahead of the 2018 election, the New Yorker described Hill as a “centrist Democrat” who “flouts the old identity conventions of female political contenders” by identifying as bisexual. Prior to joining Congress, Hill led PATH (People Assisting the Homeless) and “spearheaded a ballot measure to raise more than a billion dollars to fund permanent supportive housing for the homeless in Los Angeles.”

She told the New Yorker:

Passing H.H.H. was this incredible victory. But instead of being able to celebrate, we realized what it meant to have a Republican House and Senate and Donald Trump as President—that that could undermine every bit of hard work we’d accomplished.

So she ran and won, successfully flipping the district back to blue, in part by painting herself, with the help of media, as a more “moderate” Democrat.

Hill has since shown that is far from the case. The new, “unfiltered” Hill has made good on her promise to resurface, unabashedly picking fights with her former colleagues on Twitter and others she likely would have otherwise ignored, had her alleged sexual escapades not taken her down.

On Wednesday, Hill weighed in on the extraordinary coded message Rep. Paul Gosar (R-AZ) dropped in a string of impeachment-related tweets on Wednesday, which read, “Epstein didn’t kill himself” – a social media phenomenon which has been featured on a number of memes in recent weeks:

No like this actually happened. Real members of Congress tweeting out real conspiracy theories. In an acrostic no less. https://t.co/yVVULw6PQb

“You’re surprised by me? You single handedly taught an entire country a new word. #throuple. And wth is up with that tattoo?” Gosar said, referencing a Daily Mail article that featured “shocking” photos of the former congresswoman.

“Gee Doc, I am sorry you’re behind the times. @sho_shameless taught the country that word way back in season 7,” Hill said.

“And please don’t talk to me about a tattoo… because you just admitted you clicked to see my nudes and that disturbs the hell out of me,” she added, referring to the photos featured in the Daily Mail article:

Gee Doc, I am sorry you’re behind the times. @sho_shameless taught the country that word way back in season 7. And please don’t talk to me about a tattoo… because you just admitted you clicked to see my nudes and that disturbs the hell out of me. https://t.co/UyjSvFGwRX

Hill was particularly active during Wednesday’s lackluster impeachment hearing, desperately trying to assist her former Democrat colleagues from the sidelines. In one tweet, she declared that the identity of the so-called “whistleblower,” whose second-hand complaint sparked the partisan impeachment inquiry, “DOES NOT MATTER.” In the tweet, she referred to the “whistleblower” as a man and added a sarcastic explanation to her critics:

PS I am saying ‘he’ because I listened to The Daily podcast with @mikiebarb today and they said the whistleblower is known to be a man.  Today’s episode ‘A third graders guide to the impeachment hearings’ is a must listen for learning… and also adorable.

In another tweet, she claimed that Trump “was not asking for something to help America but to straight up help HIMSELF get re-elected.”

That Democrat talking point, however, is patently false. Trump did not condition aid on investigations into a potential political opponent.

Hill also used her renewed social media presence to attack more of her colleagues, dropping an “OMG” and continuing to lambaste Republicans. She even retweeted a highly inflammatory remark from Samantha Bee’s – a notorious anti-Trumper – Full Frontal account, which read, “Jim Jordan is pretending that the impeachment witnesses are Ohio State wrestlers and he’s an assistant coach.”

She also attempted to compare President Zelensky’s denial of “pressure” to her own experience of alleged sexual abuse.

“@RepJohnRatcliffe is trying to say that because Zelensky publicly said he wasn’t being coerced by Trump means he wasn’t. Well, I denied any kind of abuse not just publicly but to my closest friends and family for years,” she wrote. “This is no different.”

OMG. If you had any doubt as to how hard it is for the Republicans to legitimately cast doubt on any of this, please turn on the hearings now and see if you can make sense of anything they are trying to make Taylor say. I sure can’t. #impeachmenthearings

No @RepStefanik. Those are not the most important facts. The most important fact is that Ukraine received the aid BECAUSE the whistleblower stepped up. The timeline matters: Sept 9 – Intel rcvd complaint & launched investigation. Sept 11 – Aid released. https://t.co/aryOJt6Pte

.@DevinNunes wants hearings to stop so they can scream about 1) the whistleblower, 2) pretend Ukrainian “election meddling” to hurt Trump when real meddling was Russia helping Trump, & 3) Hunter Biden/ Burisma. ALL the red herrings they could find.

In another tweet, Hill lamented Breitbart News for merely reporting on her self-proclaimed emergence back into the spotlight:

Uh oh… Breitbart’s mad that I stood back up. What are they going to throw at me next to try and make me go away? https://t.co/9VM39pkNB6

In the days following her political fall, Hill has attempted to attach her recent experience to a greater feminist movement, using her newfound voice as a modern-day feminist rallying cry.

Shortly after her resignation, Hill, who admitted to an inappropriate relationship with a subordinate, took to Twitter and referred to Trump as a “serial sexual predator” and encouraged U.S. voters to put a woman in the office as a way to stomp the patriarchy and “show women and girls that we matter”:

A year from now, we have a chance to show women and girls that we matter. Hopefully, we’ll elect a woman as President — if not, let’s work to make sure a serial sexual predator no longer occupies the White House.

What are we as a nation going to do?

It is a similar sentiment Hill expressed on the House floor following her final vote on the impeachment inquiry, attempting to tie the impeachment of Trump to feminism – two subjects that have little in common.

“And so today, as my last vote, I voted on impeachment proceedings. Not just because of corruption, obstruction of justice, or gross misconduct, but because of the deepest abuse of power including the abuse of power over women,” Hill said on the House floor.

“Today, as my final act, I voted to move forward with the impeachment of Donald Trump on behalf of the women of the United States of America,” she continued.

As Hill teased, Americans can expect more from the former lawmaker, who is now – for all intents and purposes – politically exposed, unrestricted, and uncuffed.