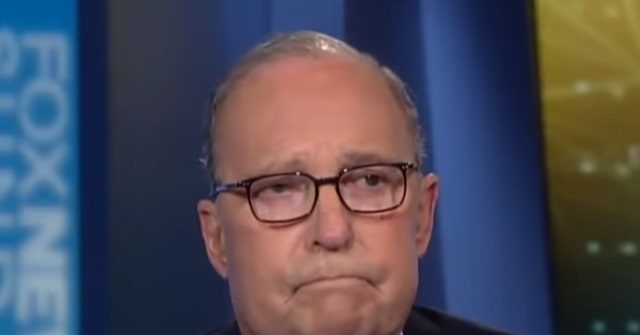 On this weekend’s broadcast of “Fox News Sunday,” Trump economic advisor Larry Kudlow argued that the tariffs the United States is set to levy on China were worth the risk, especially given the past two decades of what he called “unfair trading practices.”

CHRIS WALLACE: What yard line are we on now and what set us back?

LARRY KUDLOW: Well, we may still be on the five or the seven, but as I said in that clip, that’s the — those are the toughest yards to get. So, look, the situation for us, from our standpoint, we were moving well, constructive talks and I still think that’s the case, we are going to continue the talks as the president suggested in his tweet on Friday.

But the problem is two weeks ago in China, there was backtracking by the Chinese, and we covered the same ground with Liu He this past week, Ambassador Lighthizer and Secretary Steven Mnuchin. We can’t forget this, this is a huge deal, broadest scope and scale of anything the two countries have ever had before, but we have to get through a lot of issues.

For many years, China trade, it was unfair, nonreciprocal, unbalanced, in many cases, unlawful. And so, we have to correct those and one of the sticking points right now as we would like to see these corrections in an agreement which is codified by law in China, not just the state council announcement. We need to see something much clearer. And until we do, we have to keep our tariffs on, that’s part of the enforcement process as far as we are concerned.

And as the president said, things seem to be taking too long and we can’t accept any backtracking. We are representing the United States, the economy, farmers, autoworkers, manufacturers, these are crucial parts of this discussion. So we want to be as sure as we can be.

We don’t think the Chinese have come far enough. We will wait and see. The talks will continue. And I will say this, the G20 meeting in Japan toward the end of June next month, the chances that President Trump and President Xi will get together at that meeting are probably pretty good.

WALLACE: So, you pointed out the president’s tweet on Friday where he seemed pretty conciliatory. In fact, the stock market, which I dropped dramatically on Friday with news that the talks, the negotiations had ended without any deal, rose on the kind of conciliatory, optimistic tone from the president and from Treasury Secretary Mnuchin.

The president was much more combative in a tweet yesterday, late yesterday. I want to put this up on the screen. I think that China felt that they were being beaten so badly in the recent negotiations that they may as well wait around for the next election, 2020, to see if they could get lucky and have a Democrat win. The deal will become far worse for them if it has to be negotiated in my second term.

That’s a lot tougher than the president was talking on Friday. How come?

KUDLOW: Well, look, that’s his view. We think sometimes China may be misinterpreting the U.S. politics. I don’t want to go deep into that, but I think there’s always an issue there.

Some of the Chinese officials have said both in Beijing and here with Mr. Liu. He that this is — the agreement was too unbalanced, OK? Had to be — no, the relationship has been too unbalanced and because of these problems of unfair and sometimes unlawful trading practice, we have to have a very strong agreement to correct, to right these wrongs before we would be satisfied.

WALLACE: All right. I want to go through a quick checklist and I want you quick answers here, like a lightning round on where we stand right now. Do you expect China to retaliate for our increase in tariffs, and how soon?

KUDLOW: I think I do, but it’s interesting, the expected countermeasures have not yet materialized. We may know more today or even this evening or tomorrow. Yes, I reckon they will. We will see what they come up with. So far, we haven’t heard on that basis.

WALLACE: Are no talks — at this point, you say, well, talks will continue, are new talks scheduled with China?

KUDLOW: Not yet, but the Chinese have invited the Ambassador Lighthizer to come over to Beijing, Secretary Mnuchin also. No concrete definite plans yet. I do expect that — and by the by, let me repeat, the strong possibility that the two presidents will meet in Japan at the G20 meeting.

WALLACE: How long before President Trump makes good on his threat to impose 25 percent tariffs on all the rest of Chinese imports into this country, basically the final $300 billion in Chinese goods?

How long does it take? I don’t know, it could be a couple of months, thereabouts.

WALLACE: A couple of months, because there has been talk three or four weeks. You’re saying it could take longer.

KUDLOW: Yes. Among other things, there has to be — as I understand it, a 60 day public commentary or something like that. So, you know, call it a couple months, call it three months, I don’t know. Ambassador Lighthizer can detail that. But that will take some time and then of course the president is going to have to make the final decision on that.

WALLACE: Let’s talk about who pays, who pays for the higher tariffs on Chinese imports. Here’s what President Trump had to say this week.

DONALD TRUMP, PRESIDENT OF THE UNITED STATES: Our country can take and $120 billion a year in tariffs, paid for mostly by China, by the way, not by us. A lot of people try to steer it in a different direction. It’s really paid — ultimately, it’s paid for by — largely by China.

WALLACE: But, Larry, that isn’t true. It’s not China that pays tariffs. It’s the American importers, the American companies that pay what in effect is a tax increase and oftentimes passes it on to U.S. consumers.

WALLACE: But the tariff on goods coming into the country, the Chinese aren’t paying.

KUDLOW: No, but the Chinese will suffer GDP losses and so forth with respect to a diminishing export market and goods that they may need for their own —

WALLACE: I understand that, but the president says that doesn’t — that China, it pays the tariffs, they may suffer consequences but it’s U.S. businesses and U.S. consumers who pay, correct?

KUDLOW: Yes, to some extent. Yes, I don’t disagree with that. Again, both sides will suffer on this. Look —

WALLACE: I want to pick up on both sides because let’s look at one study that projects with the costs are of all U.S. tariffs. Look at the screen. This study found that current tariffs, all current tariffs cost an average family of $767 a year and cut U.S. employment by more than 900,000 jobs.

And the study found if the president were to impose that 25 percent tariffs extended on all Chinese imports, including the 300 billion, plus the cost of Chinese retaliation, it will cost an American family of $42,200 a year, cut the American employment by over 2 million jobs and cut GDP growth by more than 1 percent.

KUDLOW: Our work on CEA and NEC think those are pretty wildly exaggerated numbers. I would suggest that if you go the whole boat, 200 billion increase from 10 to 25, plus the other 300 billion, we reckon it would be about two tenths of 1 percent of GDP, so it’s a very modest number. We have a $20 trillion GDP.

In terms of possible job losses, we are way, way below that number.

And I want to note here: the United States economy is in a boom. The numbers are coming in terrific, better than anybody expected on growth, on jobs, on unemployment, on wages, on productivity, we are in terrific shape.

In order to correct 20 years plus of unfair trading practices with China, as I said, unlawful trading practices, I think this is a risk we should and can take without damaging our economy in any appreciable way.

I will note as others have, maybe this is part of your lightning round bullets, maybe the toughest burdens on farmers. The agriculture sector, we get there. We help to them before on loss exports. I think we had an authorization of $12 billion. We will do it again if we have to and if the numbers show that out.