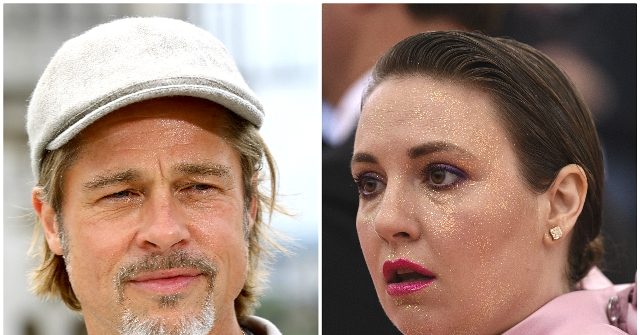 Left-wing actress Lena Dunham is under fire for what many media members are saying is her awkward attempt to kiss A-lister Brad Pitt on the lips during the premiere of Once Upon a Time In Hollywood.

Recently surfaced photos show the Girls creator and actress attempting to kiss Pitt on the lips, sparking a flurry of headlines about her purported sexual misconduct:

Lena Dunham has been accused of inappropriate behavior after she evidently tried to kiss Brad Pitt on the lips during the London premiere of #OnceUponATimeInHollywood: https://t.co/RytAQpeYea pic.twitter.com/VOhFw8YlHj

As Insider noted, the photo did, in fact, provoke a conversation on the feminist double standards on sexual assault and consent.

“If this is accurate- and Lena Dunham attempted to kiss Brad Pitt on the lips without consent, call it what it is: sexual assault/harassment,” one Twitter user wrote.

The actress has been a fierce advocate for feminism and has made extreme statements like, “I’d honestly rather fall into one million manholes than have one single dude tell me to watch my step” and “What if 30 million women or so filed a class action suit against the president for emotional distress? Just spitballing here.”

The HBO star, who aggressively opposes President Donald Trump, emphatically supported Hillary Clinton in 2016. Despite her professed devotion to all things feminist, she admitted that she performed at a Clinton benefit organized by the Weinstein Company, despite knowing about the disgraced producer’s abominable behavior.

In an op-ed for the New York Times, she wrote:

In the fall of 2016, I performed at a benefit for Hillary Clinton organized by the Weinstein Company. I had heard the rumors. I felt that going onstage under his aegis was a betrayal of my own values. But I wanted so desperately to support my candidate that I made a calculation. We’ve all made calculations, and saying we’re sorry about those calculations is not an act of cowardice. It’s an essential change of position that could shift the way we do business and the way women regard their own position in the workplace. I’m sorry I shook the hand of someone I knew was not a friend to women in my industry.

That aside, Dunham is no stranger to flaunting her sexuality, frequently posting provocative photos on social media for her millions of followers to see:

Today is National Leathercraft Day, National Relaxation Day and National Lemon Merengue Pie Day. It’s also the 9 month anniversary of my hysterectomy. I’ve never celebrated the 9 month anniversary of anything and I realized last night why that number feels so funny- I won’t ever do it the way I planned to. My body is mostly healed and every day I find a new bruise on my heart, but today I offer myself gratitude: from the most pained place, I somehow knew to choose myself. The purest glint of who we are and know we can be is always available to us, calm and true at our center. My friend Paul named my uterus Judy, and when she was being uppity we called her out, hence the tattoo on my ribs, which hurt like fuck even through the pain meds: #RIPJudy. Today I give thanks for Judy, for her graceful exit and for this body, which is stronger than I’ve ever given it credit for. Happy Giving Birth To Myself Day.

Inspired by @captdope, here’s a commercial for HEALTH INSURANCE. https://t.co/e8KpWkyQz1– get what’s yours #pullthisad 🙏 pic.twitter.com/LcJP9GdnbU