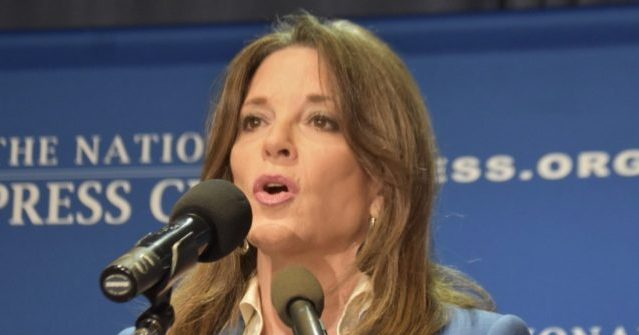 New Age guru and Democrat presidential hopeful Marianne Williamson said at a press conference on Thursday at the National Press Club in Washington, DC, that the same effort it took to defeat Hitler in World War II is needed to combat climate change.

“The first thing I would do is make sure that the Environmental Protection Agency (EPA) is headed by world-class environmental scientists or Jay Inslee, whichever is available,” Williamson said, referring to the governor of Washington state who joined and then dropped out of the race for the Democrat 2020 nomination. Inslee made climate change the top priority of his short-lived campaign.

“We need the ex-chemical company executives to be gone,” Williamson said, referring to the left’s opposition to President Donald Trump’s effort to reverse unnecessary regulations on U.S. businesses put in place during the Obama administration.

“We need the ex-lobbyists for the oil companies to be gone and the EPA to be a magnet for world-class environmental science,” Williamson said.

“We have a situation where if we do not act, and quite radically I must say, within the next 12 years we could have within the next 15 or 20 years a level of social collapse unseen in the modern era,” Williamson said.

“Then that means, of course, that food cannot be grown there,” Williamson said. “It means economic collapse.”

“You think there’s a refugee crisis now, just wait to see what would happen then,” Williamson said.

Williamson is a best-selling author who gained fame for her self-help, motivational speaking and as a spiritual adviser to celebrities, including Oprah Winfrey.