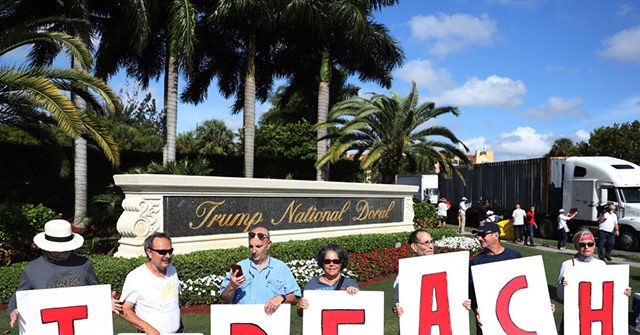 More than 600 protests are set to take place across America on Tuesday and Wednesday in an effort to show support for the impeachment of President Donald Trump.

The country-wide events, dubbed “Nobody Is Above the Law,” are set to begin in various states on Tuesday evening at 5:30 p.m. local time.

“The night before the House of Representatives takes a somber vote to impeach Trump, we’ll head to every congressional office and public square to declare that Nobody Is Above the Law as representatives finalize their positions and senators look on,” the event website stated.

Partners for the more than 600 events taking place nationwide include Need to Impeach, Women’s March, MoveOn, By the People, Center for American Progress, NextGen America, Voto Latino, Equal Justice Society, Progressive Democrats of America, Indivisible, and many others.

Several Hollywood elites have shared information on the event with their followers, including Alyssa Milano, Rob Reiner, and George Takei:

🚨The House votes to impeach on Wednesday.

📣That means on Tuesday night, it’s time to MARCH.

🔥We need you! Find your march and then BE THERE ↘️ https://t.co/ulTZJbAHO4

Don’t let these articles of impeachment become empty words. Be in the streets the night before the House votes to say that Nobody is Above the Law, and demand Trump be removed. We have to keep pushing. Find events by texting ‘protest’ to 21333: pic.twitter.com/BzekjyoH6b

Where will you be Tuesday night? Be a part of history at a “Nobody is Above the Law” march. Your voice matters. Use it to be on the side of democracy.

Text PROTEST to 21333 to find the event nearest you. pic.twitter.com/qqk6jpinVl

“Nobody Is Above the Law,” the event website stated. “That’s why we’re calling on Congress to Impeach & Remove Donald Trump.”