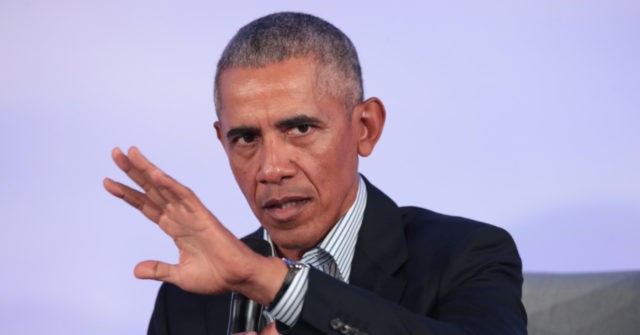 Former President Barack Obama warned a group of leftist donors that Democrats must be cognizant of public sentiment going into the 2020 election, taking a veiled shot at far-left candidates like Sens. Elizabeth Warren (D-MA) and Bernie Sanders (I-VT) by noting that Democrats “have to be rooted in reality.”

The former president spoke to a group of liberal donors in Washington, DC, on Friday and suggested that the far-left ideas articulated and pursued by some of the candidates in the Democrat primary could turn away potential voters.

“Even as we push the envelope and we are bold in our vision we also have to be rooted in reality,” Obama said, according to the New York Times. “The average American doesn’t think we have to completely tear down the system and remake it.”

Obama refrained from naming a specific candidate, but he, according to the Times, “cautioned that the universe of voters that could support a Democratic candidate — Democrats, independents, and moderate Republicans — are not driven by the same views reflected on ‘certain left-leaning Twitter feeds’ or ‘the activist wing of our party.’”

Ocasio-Cortez, Tlaib, and Omar eagerly endorsed Sanders, who has called for a “political revolution,” promising massive proposals such as Medicare for All, a Green New Deal, and “free” college and “free” universal childcare. Pressley veered from her colleagues, throwing her weight behind Warren, who has also proposed ultra-far left proposals, including Medicare for All and an “Ultra-Millionaire” tax.

Obama continued, according to the Times:

I don’t think we should be deluded into thinking that the resistance to certain approaches to things is simply because voters haven’t heard a bold enough proposal and if they hear something as bold as possible then immediately that’s going to activate them.

“For those who get stressed about robust primaries, I just have to remind you I had a very robust primary,” Obama added. “I’m confident that at the end of the process we will have a candidate that has been tested.”

Obama has yet to throw his support behind any of the current Democrat candidates, including his former running mate and vice president Joe Biden (D).

Obama ally Deval Patrick (D), former governor of Massachusetts, recently jumped into the race ­– a move Breitbart News’s John Nolte described as a slap in the face to Biden:

Well, Patrick and Obama are close. In fact, Obama tried to talk Patrick into running last year, but was turned down. Patrick feared the ugliness of the race, his wife was ill, and he was probably thrilled to be making a pile of money giving women cancer.

But Patrick is getting in now, isn’t he? And it is more than fair to assume he’s getting in because Obama begged him to. The reasons are obvious…

As is being reported everywhere, the smoke-filled-room fellas, the leaders of the Democrat Party, the money men, the Obamas, etc., are terrified of Warren’s socialistic tendencies, know Buttigieg is too young and too gay… But most of all they know Old Joe Biden just doesn’t have the stuff.

To be fair, Slow Joe never had the stuff. He’s always been a terrible presidential candidate, and there are reports Obama tried to discourage him from running.