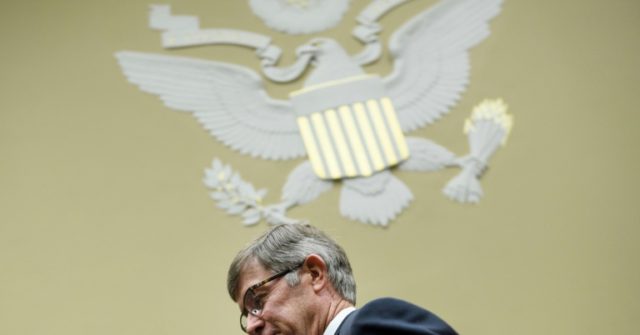 The law does not explicitly prevent anyone other than the intelligence community inspector general (ICIG) who received the complaint that triggered the impeachment inquiry from outing the identity of the so-called “whistleblower,” several mainstream media outlets have conceded in recent days.

Even left-wing mainstream media outlets—CNN, the New York Times, National Public Radio (NPR), and Reuters — determined that, certainly, no law prohibits President Donald Trump or members of Congress from disclosing the name of the leaker who sparked the impeachment inquiry.

CNN acknowledged on November 8, “It is true no law explicitly prevents anyone, other than the IG [inspector general] and their staff, from revealing the name of a whistleblower.”

In recent days, President Trump and his allies have amplified their calls for the whistleblower who sparked the impeachment inquiry to be identified, presenting the question of whether it would be a crime for the president to unmask the anonymous whistleblower.
According to four former top federal government officials who worked in intelligence and national security [even under former President Barack Obama], the answer is no. …Similarly, if a news outlet, member of Congress or member of the public outed the whistleblower, legal experts said, no criminal law would be violated.

“There is no overarching protection for the identity of the whistleblower under federal law,” said Dan Meyer, a lawyer and the former executive director of the intelligence community whistleblower program. “Congress has never provided that protection.”

Rep. Eric Swalwell (D-CA) acknowledged that much, threatening via Twitter on November 6 to introduce legislation to make identifying the “whistleblower” illegal.

In the future, you will go to jail if you out a whistleblower. Legislation coming.

“It is completely clear that no one else has any legal obligation to protect the whistleblower’s identity at all. Such would be a blatant violation of the First Amendment even past the lack of statutory requirement,” Red State noted.

The legal prohibition on disclosing the [“whistleblower”] name applies only to [Intelligence Community IG Michael] Atkinson. It does not bar Mr. Trump and his allies from trying to identify him or disclosing his name if they figure it out. (It would be illegal under the Intelligence Identities Protection Act for any official to disclose his name if he is a covert agent, but no one has suggested that he is.)

The Times goes on to note that the officials who gave information to the “whistleblower” are “probably not” guaranteed anonymity or protected from reprisals.

Although it is not illegal to name the leaker behind the impeachment probe, there could be some repercussions for those who out the “whistleblower,” NPR warned, adding:

Workplace retaliation against the whistleblower following disclosure would constitute a federal crime.

The bottom line is, Trump and members of Congress are exempt from criminal charges from revealing the “whistleblower’s” name, but Donald Trump Jr. may not.

“Once the [‘whistleblower’] complaint is out of the inspector general’s hands the law does little to guarantee the whistleblower anonymity, said McClanahan, the executive director of National Security Counselors, a public interest law firm,” according to Reuters.

Trump outing the “whistleblower” could be considered a form of retaliation. Still, it would not violate any laws, Robert Litt, the former general counsel for the Office of the Director of National Intelligence under Obama, told NPR.

However, John Cohen, a former official in the U.S. Department of Homeland Security (DHS), recently told Reuters the directive “does not necessarily prevent disclosure of the identity of the whistleblower, which may subject the individual to retaliation from others.”

On August 12, the “whistleblower” lodged a complaint with IG Atkinson about a July 25 phone call between Trump and Ukrainian President Volodymyr Zelensky.

The Bidens, Trump, and Zelensky have all denied any wrongdoing.

Left-wing mainstream media outlets are refusing to release the name of the “whistleblower.”

On October 30, however, Real Clear Investigations suggested that anti-Trump CIA analyst Eric Ciaramella is the “whistleblower” behind the complaint at the heart of the impeachment probe.

The Washington Examiner noted, however, that no one has been able to provide a definitive confirmation that Ciaramella is indeed the leaker, adding that other names have surfaced as possible suspects.

Ciaramella’s name appears in at least one of the transcripts of closed-door testimony provided by impeachment probe witnesses.