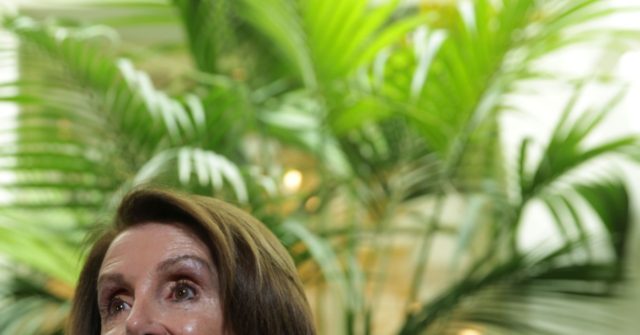 House Speaker Nancy Pelosi (D-Calif.) will fly out Sunday with a large delegation of congressional Democrats heading 3,781 miles across the Atlantic to the United Nations COP25 climate change conference in Madrid.

A key element of the conference will seek to place financial penalties on global commercial aviation to stop people flying and making “unnecessary contributions to atmospheric carbon dioxide pollution.”  The Pelosi delegation will join almost 25,000 people and 1500 journalists flying into the Spanish capital to attend the meeting.

The members of the taxpayer-funded Pelosi Democrat delegation include:

COP25 will also consider implementing taxes on developed countries to transfer wealth to nations dealing with “the cost of drought, floods and superstorms made worse by rising temperatures,” as Breitbart News reported.

Pelosi’s team claims it will will seek to “reaffirm the commitment of the American people to combating the climate crisis” at the 2019 United Nations Framework Convention on Climate Change, also called COP25, her office said on Saturday confirming the trip.

This is despite the fact the Speaker of the House will represent nobody but herself and her party as she is prevented by law from conducting foreign policy or make any agreements with foreign leaders regarding sovereign treaties.

“It is a privilege to accompany a high-level Congressional delegation to Spain to combat the existential threat of our time: the climate crisis,” Pelosi said in the statement.

“Taking action to protect our planet is a public health decision for clean air and clean water for our children, an economic decision for creating the green, good-paying jobs of the future, a national security decision to address resource competition and climate migration and also a moral decision to be good stewards of God’s creation and pass a sustainable, healthy planet to the next generation,” she added.

President Donald Trump officially withdrew the U.S. from the Paris Climate Accord in October as part of an election promise to voters, saying he was “elected to represent the citizens of Pittsburgh, not Paris.”

As Breitbart News reported, as far back as June, 2017 Trump said he was looking forward to exiting the agreement.

The president spoke then of following through on his commitments to the American people.

“In order to fulfill my solemn duty to protect America and its citizens, the United States will withdraw from the Paris Climate Accord,” Trump declared.

Compliance with the accord could have cost the U.S. “as much as 2.7 million lost jobs by 2025 according to the National Economic Research Associates,” said Trump. “This includes 440,000 fewer manufacturing jobs — not what we need…”

The final U.S. withdrawal from the landmark accord is scheduled for November 4, 2020, a day after the next presidential election.

Several Democratic presidential aspirants have said that, if elected, they would immediately return to the agreement.