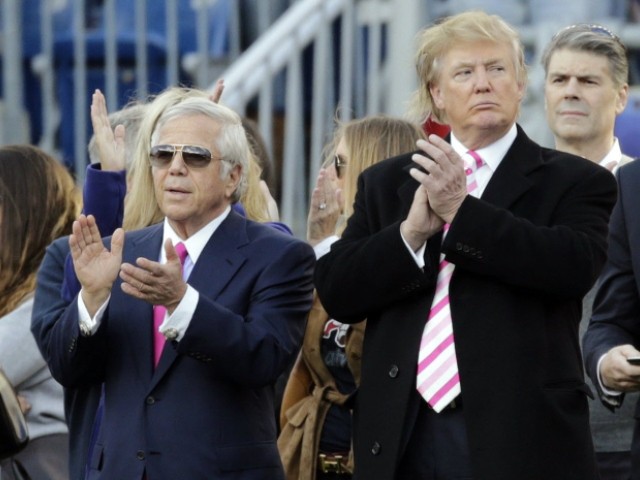 A senior White House official told Politico, “Trump has told staffers he wants Kraft there when the reigning NFL champions visit this spring.”

On February 4, the Patriots beat the Los Angeles Rams, 13-3, to capture Super Bowl LIII at Mercedes-Benz Stadium in Atlanta. It is the sixth Super Bowl crown for the Patriots’ trio of coach Bill Belichick, QB Tom Brady and Kraft.

It’s a tradition for the Super Bowl champion to be honored at the White House a few months after their victory, but it was unclear if Kraft would be still be invited given his current legal entanglement.

In February, Palm Beach County authorities announced Kraft was videotaped twice paying for a sex at Orchids of Asia Day Spa in Jupiter, Florida. The billionaire pleaded not guilty to charges of solicitation.

After the allegations went public, a Kraft spokesperson denied he committed a crime.

“We categorically deny that Mr. Kraft engaged in any illegal activity,” the spokesperson said.

On Wednesday, Kraft turned down a plea deal offered by prosecutors, according to several published reports. If Kraft agreed to the plea, charges would be dropped in exchange for fines, community service, and an admission of guilt. Kraft was one of 25 men caught in the sting who was offered this deal.

Kraft, and 14 other defendants, filed a motion Wednesday looking to block the release of surveillance video connected to the charges.

But as Kraft works through this legal issue, Trump is leaving open a White House invite to his long-time friend. Before becoming President, Trump was Kraft’s guest at numerous Patriots games. When Kraft’s wife Myra passed away in 2011, Trump attended the funeral.

“When Myra died, Melania and Donald came up to the funeral in our synagogue, then they came for memorial week to visit with me,” Kraft told the New York Daily News in January, 2017. “Then he called me once a week for the whole year, the most depressing year of my life when I was down and out. He called me every week to see how I was doing, invited me to things, tried to lift my spirits. He was one of five or six people that were like that. I remember that.”

The senior White House official told Politico that Trump has talked to Kraft since the charges were announced.

It’s unclear exactly when the Patriots will visit with White House, but when they do, three players have already announced they won’t go. They are twins Jason and Devin McCourty, along with Duron Harmon, all defensive backs.

“Nah,” Harmon told TMZ about not going to the ceremony. “They don’t want me in the White House.”

It’s unclear why Harmon feels the White House wouldn’t want him there.

But when the Patriots do go, Kraft’s welcomed with open arms.

“In my opinion it’s up to Kraft if he’s willing to come — not on us here to block him,” the senior White House official told Politico.