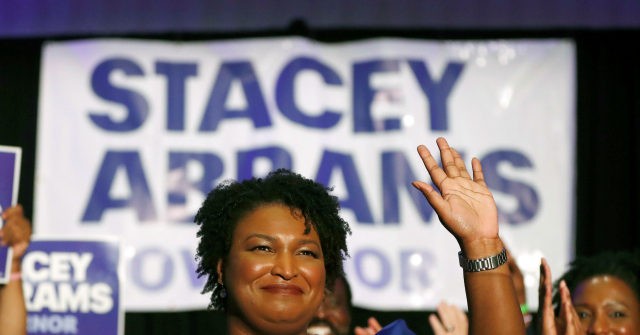 Democrat Stacey Abrams, who lost the Georgia governor’s race in the midterm elections, said on Friday that her opponent Brian Kemp is a “cartoon villain” and that she “won” that race — and she took a swipe at Breitbart News.

“I’m here to tell you a secret that makes Breitbart and Tucker Carlson go crazy: We won,” Abrams said at a fundraiser for Annie’s List in Houston, Texas. “I am not delusional. I know I am not the governor of Georgia – possibly yet.”

Kemp won the governor’s seat with 55,000 more votes than Abrams, who for some time refused to concede that she lost:

.@staceyabrams giving defiant speech to @AnniesListTX, saying she won’t be a “good sport” & go away quietly after election in which she was wronged. “We don’t have to concede elections anymore, b/c when we concede, we are condoning systems that are used to oppress us,” she says.

For the first several minutes of her speech, Abrams rehashed elements of her losing campaign, which she has chalked up to efforts she says were aimed at suppressing votes, such as long lines and low numbers of provisional ballots. On Friday, she said Kemp played a central role in the alleged efforts.

She warned the Texas Democrats — mostly women — that they would face the same kind of voter suppression in 2020.

“We are in a state of crisis,” Abrams said. “They are trying to erase our democracy, corrode it so much so that we stop believing in it. Because they know that that’s the only way to hold onto the power they have.”

“I’ve never seen a community of people work so hard to strip away our rights and our humanity as fast as they can,” she said.

Abrams had explored the idea of challenging Sen. David Perdue (R-GA) for his Senate seat but announced last week she will not enter that race, raising speculation she may try to unseat Kemp in 2022.