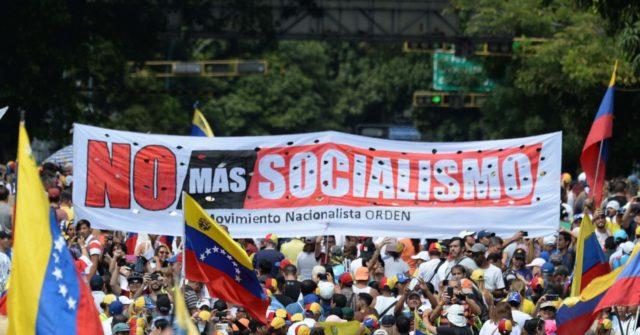 White House senior adviser and speechwriter Stephen Miller told Fox News Sunday that left-wing Democrats were not merely criticizing the U.S. to improve it, but rather hoping to turn it into a socialist country like Venezuela.

Miller appeared Sunday with host Chris Wallace to defend President Donald Trump in the ongoing controversy about his tweets about the Democrats’ so-called “Squad” — Reps. Alexandria Ocasio-Cortez (D-NY), Rashida Tlaib (R-MI), Ilhan Omar (D-MN), and Ayanna Pressley (D-MA). Wallace asked Miller whether there was any distinction between what the “Squad” had said about America, and criticisms that President Trump had made in the past:

Wallace: Why is what those congresswomen have said in general any worse than what you just heard Donald Trump say — President Obama is ignorant, this country is ‘killers,’ on and on?

Miller: It’s a great question. So I want to drill down on it because it’s really the heart of the debate that we are having in this country right now. Anybody who is running for office —  right, left, or center, — always point out where they think America can do better, where America needs to go but there’s a fundamental distinction between people who think that we need to lean into and strengthen America’s core values — whether it be our constitutional values, the rule of law, the principles of western civilization — or people who think that we basically need to turn America into Venezuela.

Miller later added: “The president ran a campaign that can be summarized in two words: ‘America first.’ There’s a huge difference between ‘America first’ and an ideology that runs down America.”

Several members of the Squad have weighed in to oppose the Trump administration’s policy of pressure and sanctions on Venezuela, but Rep. Omar has been most vocal as a member of the House Foreign Affairs Committee.

While supporting sanctions on Israel through the “boycott, divestment, sanctions” (BDS) movement, Omar has opposed sanctions on Venezuela and blamed sanctions, not socialism, for the implosion of the Venezuelan economy.

Ocasio-Cortez, appearing with the “Squad” on CBS this week, described the “story” of America as a perpetual struggle of the many against the few:

I think America has always been a story, and America has always been about the triumph of people who fight for everyone versus those who want to preserve rights for just a select few, and there is no bottom to the barrel of vitriol that will be used and weaponized to stifle those who want to advance rights for all people in in the the United States.

Omar has spoken about fighting for what America “truly should be,” not what it is.

Joel B. Pollak is Senior Editor-at-Large at Breitbart News. He earned an A.B. in Social Studies and Environmental Science and Public Policy from Harvard. He is a winner of the 2018 Robert Novak Journalism Alumni Fellowship. He is also the co-author of How Trump Won: The Inside Story of a Revolution, which is available from Regnery. Follow him on Twitter at @joelpollak.