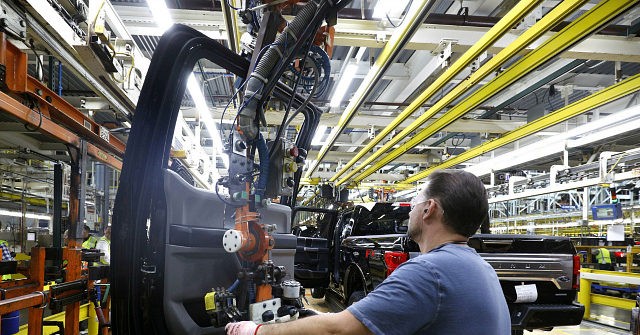 A 25-year union worker with Ford Motor Company says President Donald Trump is “the only person defending” American auto workers while 2020 Democrats propose an environmental agenda that will “destroy union jobs” for the middle class.

In an op-ed for the Detroit News, United Auto Worker (UAW) member and Ford employee Melinda Rowe called out 2020 Democrats for their “zero-carbon” agenda that will further decimate the United States’ auto industry in states like Ohio and Michigan.

GM and the other big auto companies want to make a full switch to electric vehicles, which would allow them to slash union jobs. As any autoworker can tell you, combustion engines are difficult to build, requiring more manpower and skill than electric motors. That’s why auto workers earn such good wages: It’s not easy to engineer a controlled explosion under the hood of a car. [Emphasis added]

When Democrats claim to support organized labor but also advance a radical environmental agenda that would destroy union jobs, they make it abundantly obvious that their support for union workers is merely rhetorical. [Emphasis added]

Trump is the only person defending the interests of union members against the combined forces of Democratic politicians, car company executives, and UAW leaders who care only about advancing their own interests over those of the hard working men and women of their industry. [Emphasis added]

Rowe detailed how executives at U.S. automakers have fallen in line with the Democrat agenda of eliminating fossil fuels, noting that such a move to fully electric vehicles will allow corporations to cut back their workforces more than they already have, saving them labor costs at the expense of U.S. communities.

“We saw a clear example of this in the UAW-GM negotiations, when GM proposed building a car battery factory near the plant that it recently closed in Lordstown, Ohio,” Rowe writes. “The battery plant would likely employ several hundred workers, whereas the Lordstown factory supported more than 3,000 union jobs. The battery plant will also only pay workers between $15 and $17 per hour, about half the $30 per hour that workers earned at the Lordstown factory.”

“Nobody had our backs in office, not Democrats or Republicans. I’m tired of being sugarcoated and being robbed in the process.” https://t.co/4To8bT5cXH

Rowe writes that it was “no coincidence” that General Motors (GM) has closed five American manufacturing plants and laid off 14,000 workers as they manufacture electric vehicles in China.

Warren, among other 2020 Democrats, has also pledged a nationwide ban on fracking which would likely increase oil prices and potentially lead to additional layoffs for American auto workers.