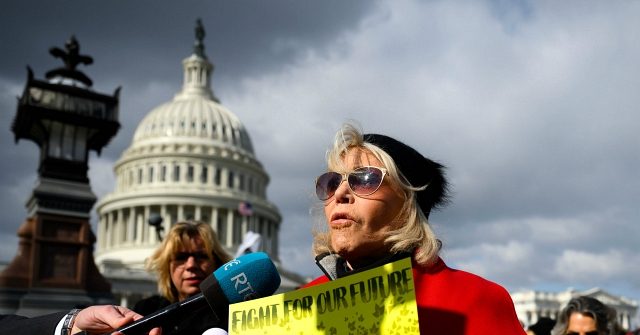 Left-wing actress Jane Fonda avoided a fifth consecutive arrest on Friday as she continued her weekly series of climate-themed protests in Washington D.C.

Instead of confining her demonstration to Capitol Hill, Fonda took her followers to The White House, where the protestors called for the impeachment of President Donald Trump and the passage of Rep. Alexandria Ocasio-Cortez’s (D-NY) trillion dollar Green New Deal.

Jane Fonda has been arrested four times in four weeks for protesting in and around the Capitol. Last week, the actress spent the night in jail after being apprehended in the U.S. Senate Hart Building.

But Fonda left Friday’s protest early and wasn’t arrested, according to a tweet from Deadline reporter Ted Johnson.

The actress told The Hollywood Reporter earlier this week that she didn’t want to risk a fifth arrest because she is set to resume production of her Netflix comedy series Grace and Frankie in January.

Fonda began the day speaking at a rally on the Southeast lawn of the U.S. Capitol Building, where protestors addressed the ways in which wars and the U.S. military allegedly contribute to climate change.

The Grace and Frankie star’s rotating cast of activists this week included Ben Cohen and Jerry Epstein, the faces behind the Ben & Jerry’s ice cream brand, who also addressed the rally on Capitol Hill.

We have the money to do it, it’s the political will that is lacking! We need the people in the building behind us to represent the people not the military industrial complex and fossil fuel companies.@YoBenCohen and Jerry Greenfield with @benandjerrys #FireDrillFriday 🔥 pic.twitter.com/bAg7LUVIn2

Protesters then marched to the White House, blocking traffic and pounding the pavement for impeachment and the Green New Deal.

We are marching to the White House! We demand a Green New Deal and the impeachment of Trump. #FireDrillFriday pic.twitter.com/1oEkUK3sVG

On her march to the White House, Jane Fonda joined other groups of protesters, including indigenous rights activists and a pro-impeachment group.

In one video posted on Twitter, Fonda is seen chanting “Lock him up!” with a group of fellow marchers.

The group started chanting “Lock him up! Lock him up!” including @Janefonda. However, @benandjerrys‘ Ben and Jerry didn’t partake in that chant. pic.twitter.com/3d2JD8XlAx

Fonda appeared on CNN earlier this week, telling host Don Lemon that “whether it’s through the elections or through impeachment,” President Trump needs to be removed from office for the sake of the environment.

“He is an oil President. His Cabinet is an oil Cabinet,” Fonda said on CNN. “He is bought off by fossil fuels. And a lot of people in the Senate, a lot of Republican candidates, are too.”

Fonda’s climate protests have brought out prominent Hollywood actors including Ted Danson and Sam Waterston, who have been arrested alongside the 81-year-old Fonda.

The Coming Home actress was first arrested Oct. 11 along with 16 others for unlawfully demonstrating on the East Front of the U.S. Capitol.