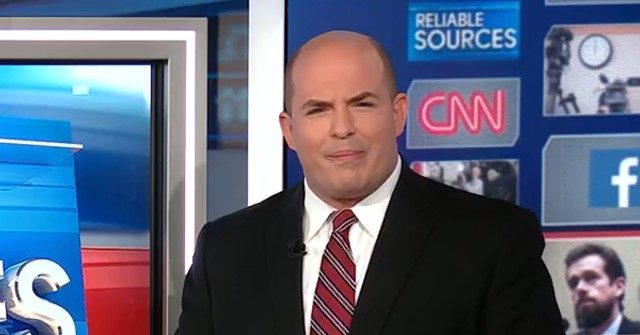 Sunday on his CNN show “Reliable Sources,” Brian Stelter took issue with a series of recent tweets by President Donald Trump telling the so-called “progressive” Democratic congresswomen to go back to their own countries after criticizing the way the United States is run, which the host deemed as “straight up racist” and “frightening.”

“These smears, these lies, this misinformation that comes mostly on the right from pro-Trump websites, Facebook pages, Twitter accounts, supported by television hosts, radio hosts,” Stelter began. “They are softening the ground for straight-up racism out of the president’s Twitter account. And that is what we are seeing today. This is one of the president’s most recent tweets — straight-up racist talking about progressive congresswomen. … Now, he’s probably talking about Ilhan Omar, who was born in Somalia, fled to Kenya and came to the United States when she was 12 years old. Other Democratic congresswomen who she is associated with, friendly with, all of whom were born in the United States. But the president is talking about Democratic congresswomen who need to go back to where they’re from.”

Stelter then shrugged and went on with the rant, saying, “It’s 2019. We’re two and a half years into the Trump presidency and his racism is becoming more obvious? More frightening? There are millions of … black and brown Americans who know exactly what he means when he says go back to where you came from. They’ve heard those words on the schoolyard, behind their backs at work. That kind of racism that Americans have been fighting against for decades is coming from the president’s Twitter feed. There’s no bigger story in the country right now. And I want to relate this to the media by pointing out that the ground has been softened by the president by this collection of pro-Trump bloggers, radio hosts, television stars who somehow think it’s acceptable to attack fellow Americans like this.”